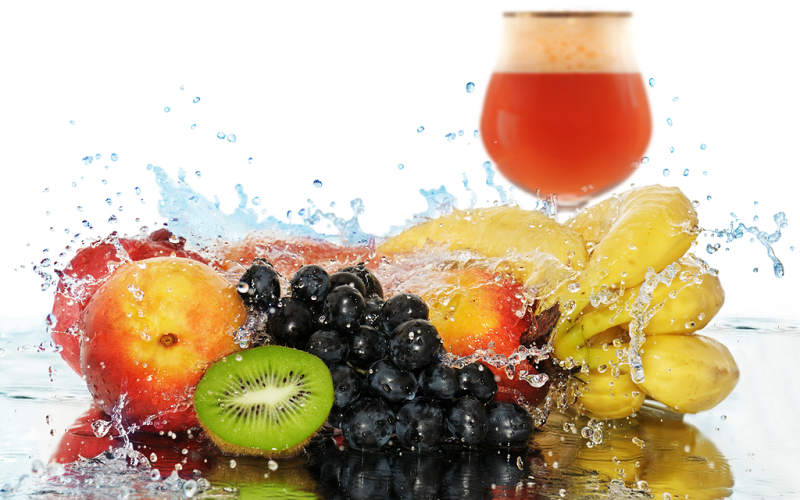 Today’s Beer 101 is about Fruit Beers- get ready for a fun lesson, readers!

First, what is a fruit beer? Fruit beers are actually a very broad category: any base beer style with fruit used as a flavor component qualifies as a fruit beer. Fruit additions can be whole fruit, puree, syrup, extract, or other forms of flavoring. Fruit character ranges from intense to mild and alcohol content generally ranges between 4-7% ABV.

Since any form of beer can become a fruit beer, let’s take a look at what fruit beers each style has to offer.

First, Belgian lambic ales make excellent fruit beers. Lambic ales (spontaneously fermented sour beers) made with fruit often have names that reflect the ingredients. For example, the cherry lambic style is known as Kriek, and the raspberry lambic style is known as Framboise. There is also Peche (peach), Cassis (blackcurrant) and Pomme (apple). Some of the more well-known breweries producing fruit lambics include Lindemans, Brasserie Cantillon, and Boon.

Speaking of the UK, next up is English fruit beer! Samuel Smith, world-renowned for their Organic Chocolate Stout, is by far the most well known producer of English fruit beers. The brewery from Tadcaster, England makes fruit beers including cherry, strawberry, raspberry, and apricot. Highly recommended!

There are plenty of fruit IPAs out there as well. Citrus fruits are most commonly used to match the citrusy notes many kinds of hops contribute to beer. Grapefruit is the most popular fruit of all to put in IPAs, and there are quite a few to try if you’re curious; some examples include Ballast Point’s Grapefruit Sculpin, Claremont’s Ggrapefruit Double IPA, and Sam Adams’ Rebel Grapefruit IPA. Non-grapefruit IPAs include Dogfish Head’s Aprihop, Ska Brewing’s Mandarina IPA, and Green Flash’s Tangerine Soul Style IPA.

If you want to try some fruit wheat beers without all that Belgian spontaneous fermentation, you’re in luck: there are plenty you can easily get ahold of stateside. Some exemplary examples are Hangar 24’s Orange Wheat, Lost Coast’s Tangerine Wheat, Barley Forge’s Nom Nom (Mango Wheat) and 21st Amendment’s Hell or High Watermelon.

Don’t worry, we’re not leaving out the dark beers! There are fruit stouts and porters out there for the tasting too. Chernyy Medved, a collaboration between Orange’s Valiant Brewing and Temecula’s Black market Brewing, is a 13% ABV seasonal Russian Imperial Stout brewed with smoked wood, pine, vanilla and cherries. Another example of a dark beer is Shipyard’s Smashed Blueberry- it’s a balanced hybrid between a Porter and a Scotch Ale that has has notes of coffee, chocolate, and blueberries.

By the way, is coconut a fruit? Who knows! But we’ll call coconut a fruit for the sake of this article and mention a couple more dark “fruit” beers. Kona’s Koko Brown, Oskar Blues’ Death by Coconut, and Barley Forge’s The Patsy Rye Stout with Coconut are all delicious and extremely coconut-y.

As for Lagers? Kopparberg makes a fine lemon and lime Fruit Lager worth checking out.

And finally, we’re not sure what the base beer of Founders’ Rubaeus is, but it makes a fine fruit beer regardless after Founders adds raspberries at five separate stages in the brewing process. Try its regular version or try it on Nitro, both are delicious!

We hope you enjoy trying some of these delicious fruit beers, and have a Happy New Year!